The History of VR (Virtual Reality) 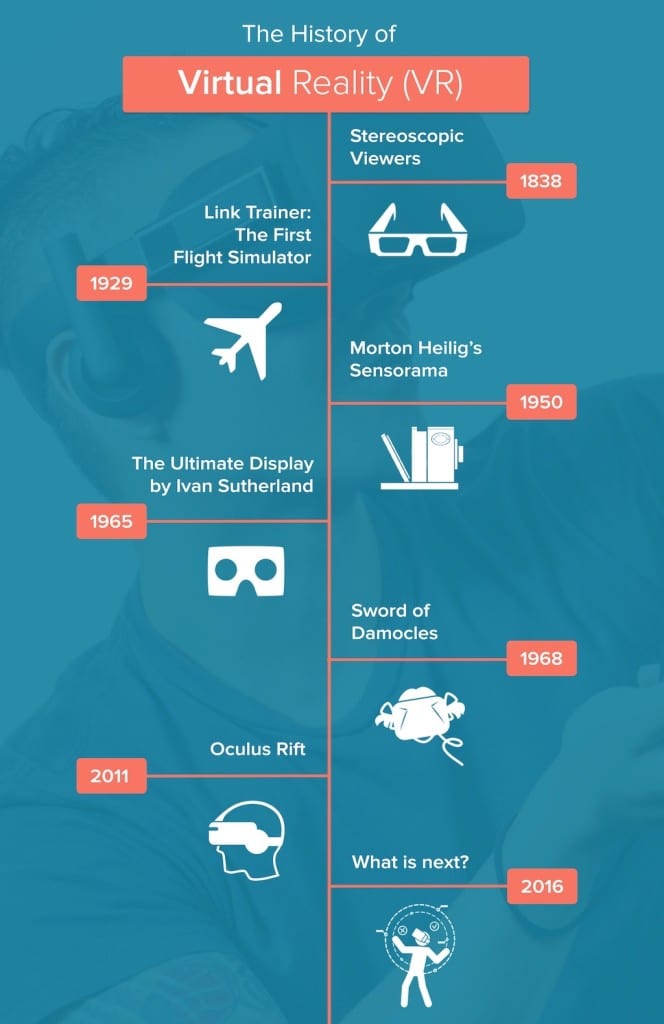 (VR) Virtual Reality has beginnings that foreshadowed the time that the concept was formulated and invented. In this detailed history of Virtual Reality, Invision Studio will look at how technology has evolved and progressed, and how key pioneers have paved the path for VR as we know it today. 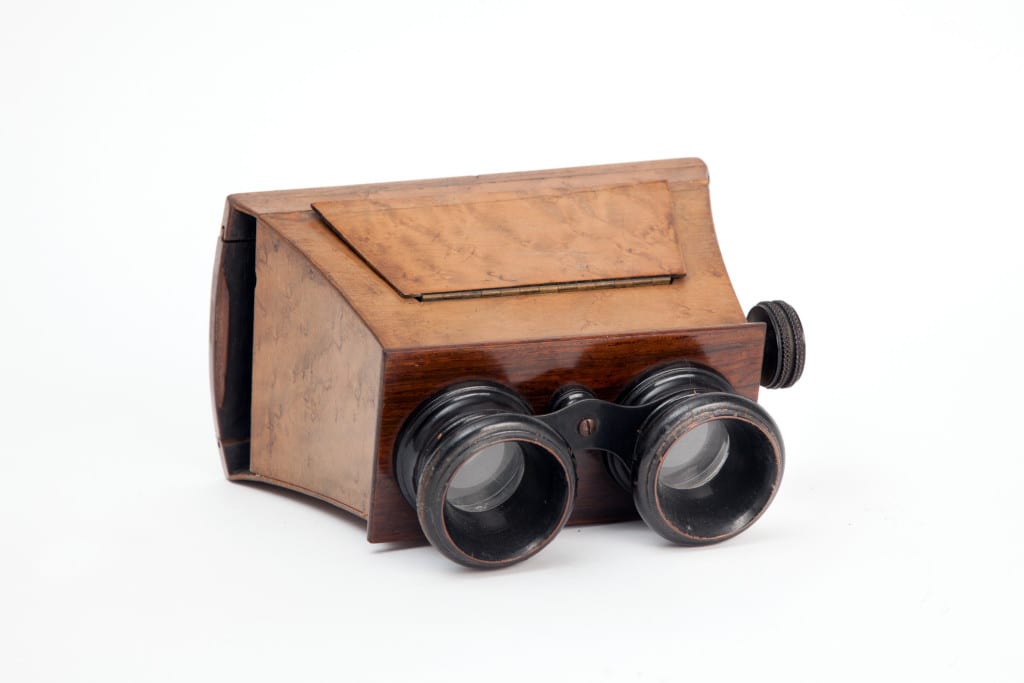 In 1838 Charles Wheatstone’s research demonstrated that the brain processes the different two-dimensional images from each eye into a single object of three dimensions. Viewing two side by side stereoscopic images or photos through a stereoscope gave the user a sense of depth and immersion.

The later development of the popular View-Master stereoscope (patented 1939), was used for “virtual tourism”. The design principles of the Stereoscope is used today for the notably popular Google Cardboard and low budget VR head mounted displays for mobile phones.

The VR industry continued to develop over the next couple of decades, but it was limited to only the most resourceful engineers and early adapter’s due mainly to the cost of components, and the computers that powered the VR systems. 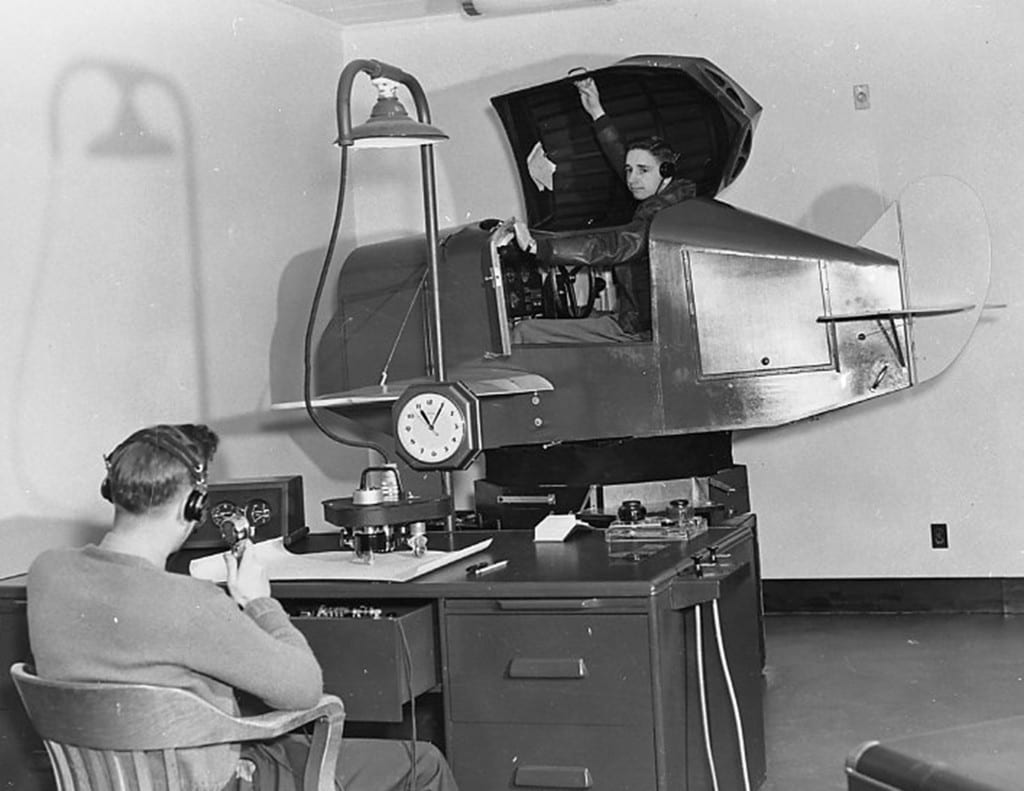 In 1929 Edward Link created the “Link trainer” (patented 1931); what many considered the first example of a commercial flight simulator, which was completely electromechanical. It was controlled by motors that linked to the rudder and steering column to modify the pitch and roll. A small motor-driven device resembled turbulence and disturbances. As research later showed, this ended up becoming the safer way to train pilots. 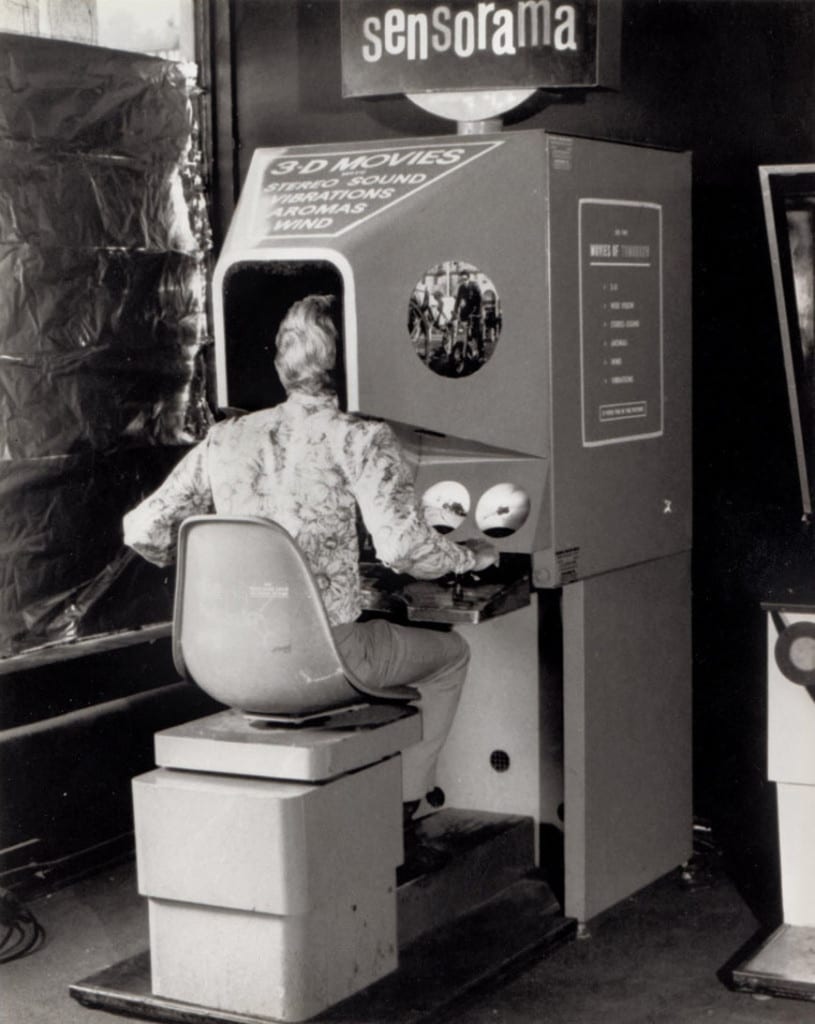 In the mid 1950s cinematographer Morton Heilig developed the Sensorama (patented 1962) which was an arcade-style theatre cabinet that would stimulate all the senses, not just sight and sound. It featured stereo speakers, a stereoscopic 3D display, fans, smell generators and a vibrating chair. The Sensorama was designed to fully immerse the individual in the film. Heilig also created six short films for his invention all of which he shot, produced and edited himself. The Sensorama films were titled, Motorcycle, Belly Dancer, Dune Buggy, Helicopter, A Date with Sabina, and I’m a Coca Cola Bottle!

1965 – The Ultimate Display by Ivan Sutherland

Ivan Sutherland described the “Ultimate Display”, a device that could overlay wireframe interiors onto a room, as a concept that could simulate reality to the point where one could not tell the difference from actual reality. Sutherland’s concept included:

This would become a core blueprint for the concepts that encompass Immersive Virtual Reality today.

In 1968 Ivan Sutherland and his student Bob Sproull created the first VR / AR HMD (Sword of Damocles). Sword of Damocles was actually connected to a computer and not a camera. It was a big and intimidating. The contraption was also too heavy for any user to comfortably wear and was suspended from the ceiling (hence its name). The user would also need to be strapped into the Sword of Damocles. The computer generated graphics were very basic wireframe rooms and objects.

Fast-forward nearly 40 years later and Palmer Luckey (the inventor of the Oculus Rift) created his first VR prototype at age 18 in his parents basement. Luckey eventually developed the product that would come to be known as the Oculus Rift. Oculus has led the way in the current era of VR (Virtual Reality) development and gave new life into this promising futuristic technology.

The announcement of the Oculus was followed closely by tech insiders, developers, and early adopters, all of whom had been eager and anxious to experience this new frontier in VR development. It wasn’t long before Facebook, Google, and Samsung took notice and began investing profoundly in VR with the hopes of producing the first consumer ready VR device.

Facebook believes so strongly in the Oculus Rift that they acquired the company for $2 Billion in March of 2014. Facebook’s founder Mark Zuckerberg stated that he sees the acquisition as a “long-term bet on the future of computing.” 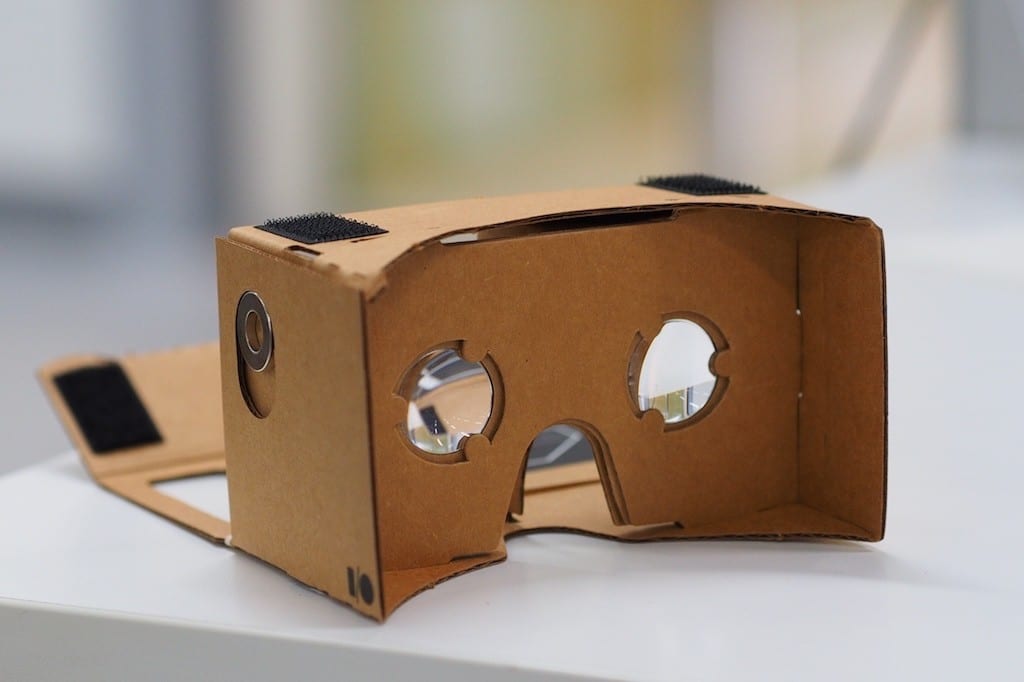 The current lineup of VR products provides a variety of options in terms of price and accessibility. You can get started with Google’s VR product name Cardboard. Cardboard is extremely inexpensive, roughly $20.00. It uses easy to obtain components like cardboard, biconvex lenses, a couple of magnets, Velcro, and a rubber band.  Instead of a built-in display like the Oculus Rift, this product is powered by any Android phone running 4.1 or higher (just slide your phone into the “headset” and you’re off and running).

The phone powers the entire experience with applications found in Google’s Cardboard app store. There are no external wires or clunky hardware to deal with, just the Cardboard case and your Android phone. 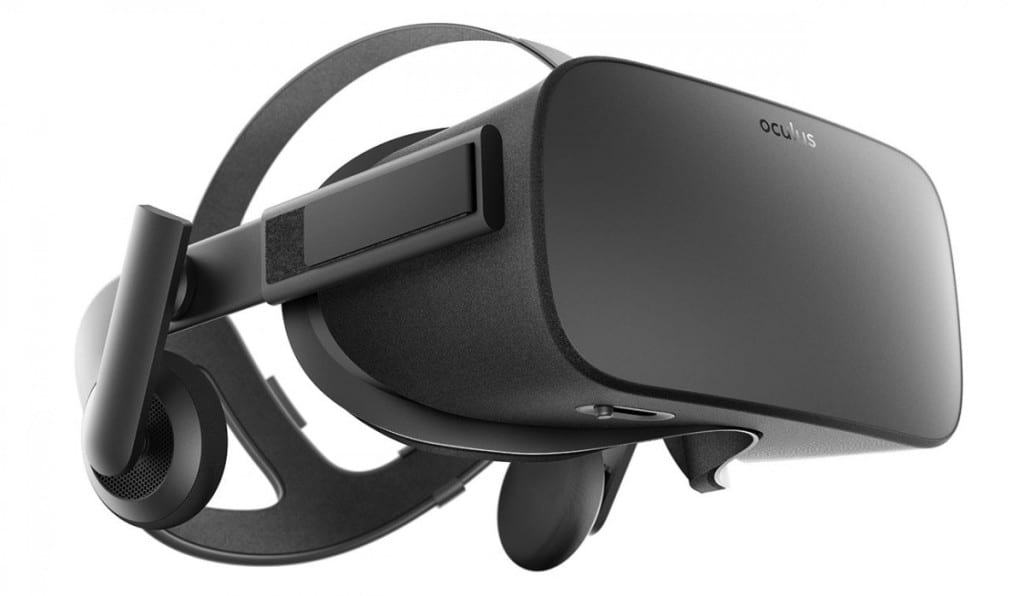 Given the current pace of innovation it is a safe bet that both the hardware and software for Facebook’s Oculus technology will only get better in the months to come. The developer model (DK2) costs $350 and comes packed with a low latency display (the same used in the Samsung Galaxy Note 3).  The display delivers a respectable 960×1080 resolution per eye with a 75Hz refresh rate. The unit also includes a gyroscope, accelerometer, magnometer and a near infrared camera for head and positional tracking.  Applications are run on a computer which is connected directly to the headset via an HDMI and USB cable.

Samsung saw an opportunity to dive into the Immersive VR (Virtual Reality) mix and partnered with Oculus. Samsung’s Gear VR Innovator Edition is exactly what you would expect from the established tech giant both in terms of quality and usability.  It’s also the most expensive option, coming in at an msrp of $200 for the headset + $750 (off-contract) for the phone required to power it. Unlike Google’s Cardboard, the Gear VR only works with a Samsung Galaxy Note 4, so if you’re lucky enough to already own one you can save yourself a significant amount of money.

The VR headset itself is very well designed and quite intuitive. There’s a volume toggle, touchpad, and “back” button on the right side of the headset that can be used to easily navigate through VR experiences and applications. The top of the VR headset holds a focus wheel that is used to adjust the focus to optimal range for your eyes. Two straps hold the unit firmly on your head which seals your vision off from the outside world to improve the sense of a complete Immersive Virtual Reality experience.  Plus, the absence of any cables shackling you to a computer helps make the experience more enjoyable and portable.

There’s no need to take the VR unit off your head in order to download or switch applications either. Everything can be done through the Oculus Home menu or Samsung’s application library after the initial setup and configuration. There are a good handful of interesting and useful apps included out of the box such as Oculus Cinema – for watching movies and videos in a virtual cinema, Oculus 360 Photos – for viewing panoramic photos, and Oculus 360 Videos – for viewing panoramic videos.

The Downside OF VR Technology

We’ve found that many of the applications available now are graphics heavy and the experience can degrade quickly without a fairly good graphics card.  It is worth noting that experiences involving 3D graphics and rapid motion can quickly become nauseating to some individuals due to frame-rate or GPU restrictions and a phenomena known as “judder” (when the images become smeared, strobed or otherwise distorted), so it is really the responsibility of developers to create “comfortable” experiences which aim to minimize “judder”.

Despite the drawbacks – when used hand in hand with a computer that has a high end GPU, the result is a sense of immersion that 10 to 15 years ago would have seemed nearly impossible.

The VR Future Is Here!

We’re just starting to sniff the surface with Immersive Virtual Reality. The emergence of panoramic video and photo is making it easy to “teleport” viewers to places they could never physically be in the past.

It seems clear that 2016 will be a key year in the virtual reality industry. Multiple consumer devices that seem to finally answer the unfulfilled promises made by virtual reality in the 1990s are now coming into market.